After last week’s reveal of Tiger Lake-H, today’s results put things into context for Intel’s new high-end enthusiast mobile platform. The new design follows roughly 8 months after our initial coverage of the lower power “regular” Tiger Lake design and SKUs. The question is whether the new Tiger Lake-H can differentiate itself beyond just the notion that it’s a doubled-up core count variant of the lower power models.

I’ll have to reiterate that our review today isn’t nearly as in-depth as usual – due to circumstances we’ve essentially only had 2 days’ worth of testing of Intel’s reference Tiger Lake-H laptop, however in this time I think we can come to some crucial conclusions as to how the design performs and where it positions itself against the competition. 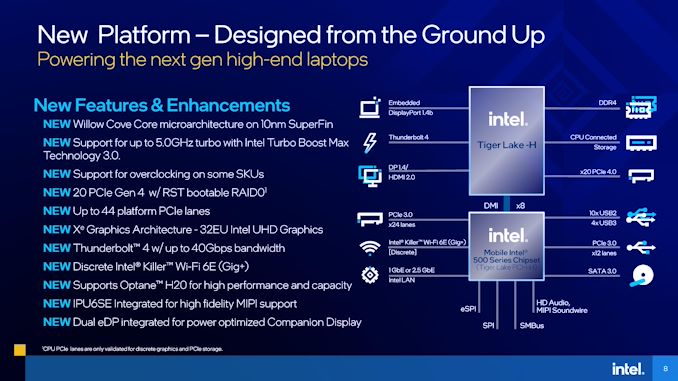 From a feature perspective, the new Tiger Lake-H platform seemingly delivers, offering up the necessary I/O and platform features to enable it to compete in the super high-end enthusiast and desktop-replacement laptop market.

Obvious requirements for this segment are also unquestioned performance metrics, and it’s here where things become rather complicated for the new 8-core Willow Cove design.

The area where the new TGL-H and particularly today’s tested Core i9-11980HK performs extremely well and is undoubtedly the leader among mobile x86 CPUs, is in its single-threaded performance. The new Willow Cove CPU cores alongside with the extremely high 5GHz boost frequencies achieved by the chip means that it manages to differentiate itself to even AMD’s more recent Cezanne Zen3 based Ryzen Mobile chips. While the performance lead isn’t large, it’s extremely solid at a 7-10% advantage throughout a very large number of workloads throughout our test suite.

Where things are quite as straightforward, is the multi-threaded performance, as this is where we have to mention TDPs, power limits, and just the result of the Intel reference platform laptop we’ve tested today.

The system, as delivered by Intel, came with a default maximum 65W cTDP/PL1 setting, which is the i9 11980HK’s maximum advertised power setting. Unfortunately for the SKU, the reference laptop’s thermal design was not able to keep up with the power output of the chip under this setting, and we had to revert the system to Intel’s advertised default 45W PL1 setting for the chip. The 65W mode was just not sustainable, with noticeable thermal tripping down to 35W as well as peak temperatures of up to 96°C. In our multi-threaded SPEC tests, we saw the 65W mode only perform 9% better than the 45W mode even though in theory it’s supposed to have a 44% larger thermal envelope. 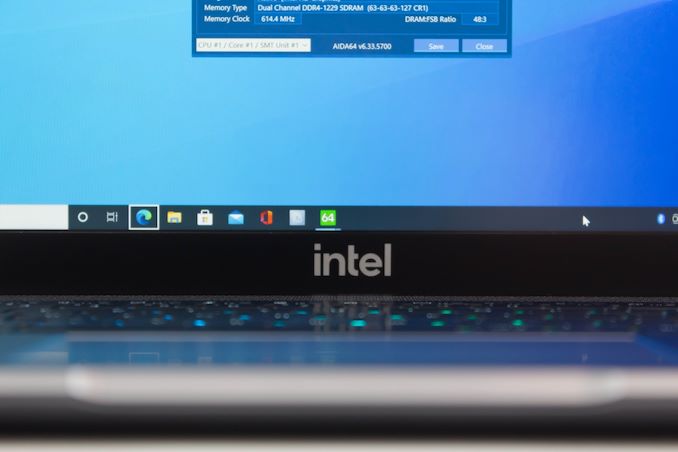 At 45W, the multi-threaded performance of the chip is well sustainable and reasonable for this kind of device form-factor and cooling solution, but here it needs to be put into context, particularly against the nearest competition, which is AMD’s Ryzen 9 5980HS. In our benchmarks, both the Core i9-11980HK and the Ryzen 9 5980HS battle it out, sometimes with the Intel chip coming ahead, sometimes with the AMD chip leading the results. The issue with this comparison though is that we’re comparing a 45W chip vs a 35W chip, and more often in compute heavy workloads such as rendering or encoding, the AMD chip comes ahead even though it has a lower TDP.

Intel’s new 10nm SuperFin process had promised to finally outperform the mature 14nm node – while we couldn’t get to a definitive conclusion based on the initial 4-core Tiger Lake designs due to the smaller core numbers, here in 8-core vs 8-core scenario at their latest microarchitecture implementations, we can still see that Intel is lagging behind in terms of efficiency versus AMD’s 7nm CPUs.

This leads us to the conclusion and question for whom the new Tiger Lake-H designs are meant for. The market in recent years has generally attempted to switch away from bulkier desktop-replacement laptops, but it’s precisely this product segment which seems to be what Intel is targeting with TGL-H. A thicker device with more robust cooling capabilities would certainly unleash the new 8-core design’s performance, but unfortunately, exactly where this performance would end up is something we unfortunately weren’t able to answer in today’s piece.

The rest of the market generally is pivoting towards high-performance compact designs within that crucial <20mm thickness. While Tiger Lake-H here certainly delivers large generational performance improvements to previous SKUs in the H-series, such as Comet Lake-H, it doesn’t seem to be sufficient to quite catch up to the AMD alternatives which while maybe not as performant in every workload, do win it out on an efficiency basis.

As Intel noted in its launch event, Tiger Lake-H is said to already have 80+ enthusiast designs in the works, likely to come out in the next few months to rest of the year. The final verdict on TGL-H will be in final commercial products, which we expect to see in the next month or two.